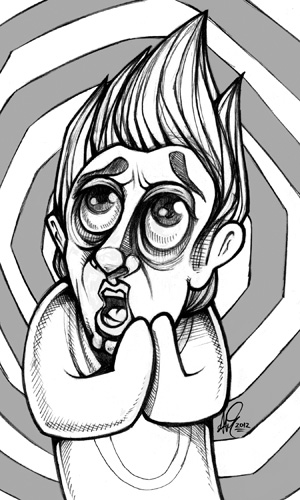 Clark came into my office almost 10 years ago and was one of the most stressed out individuals I have ever met. He ran a large public relations company and his job was to constantly put out fires for his clients. He once said his favorite thing to do in life was to be on a long airplane flight because nobody could call him.

Clark came to see me because he was suffering from memory lapses, insomnia, and mild depression. These all result from imbalances in brain chemistry, and in Clark’s case it was caused primarily by the stress he placed on himself.

Despite his high stress lifestyle he exercised daily and ate a healthy diet. When we first discussed his case I brought up the issue of his stress load and I made him commit to taking one day a week off. His off day was still more stressful than most people’s regular days of work. However, he lowered his workload and did not take on new projects. I also placed him on various supplements to help his stress response as discussed in this chapter.

He started to notice improvements in memory and was starting to sleep better at night. This only lasted for a about 3 weeks and then he dropped out of my office and went back to his hectic lifestyle again. Years later I ran into him at the airport. I almost did not recognize him because of how much older he looked. He had aged very rapidly. He told me that was now on several hypertensive medications, sleep medications, and was starting to have regular migraines. I tried to ask about his lifestyle, but he did not want to talk about it.

I have not seen Clark since then, but a stress-based lifestyle will not only age you faster but also promote ulcers, shrink the brain, and increase the risk of Alzheimer’s and other brain chemical disorders. Unfortunately, many people with increased stress responses do not make the right decisions and suffer the consequences.

I share Clark’s case with you because he is like many people who do not understand the toll chronic unrelenting stress can have on the body and, more specifically, the brain. In this chapter I will present these concepts to you.