Patient testimonials help explain complex information through the experiences of real people. They also provide hope and optimism for those suffering from frightening brain health issues — optimism and positivity are important to improving brain health. These stories do not represent quick fixes or gimmicks, but rather years of exhaustive research, trial and error, and the patient’s own willingness to do the work.

There are many patients stories beyond those in the book, which we will be adding to this page as they come in. If you are a reader or a practitioner with a success story based on the information in this book, please email us.

Patient not a hypochondriac

Thank you, thank you, thank you. I received my new brain book in the
mail yesterday and I cried. I am so excited and relieved. Finally
someone understands. I am not a hypochondriac, or attention seeking,
or just plain weird. I am on my 12th doctor who was to be my last
as they all help but as yet none have been able to cure me. I had
resigned myself to accepting my lot in life, living what I call half a
life. Dr Kharrazian’s book is so clear and understandable and has put
all the confusing pieces of the puzzle into place and given me hope.

Barbara, a 53-year-old woman who worked at home as a consultant arrived in my office two years ago for help with her digestive and thyroid issues. Over time, she worked hard to make diet changes that I requested in order to calm her small intestinal bowel overgrowth (SIBO), and I helped calm down her immune system with protocols that I learned from Dr. Kharrazian in his advanced thyroid training. Over the next few months, she made large strides in her ability to function normally throughout the day without falling asleep at her desk.

However, despite successful control of her SIBO, Barbara was still reliant on HCL supplementation, pancreatic enzymes, and bile support to properly digest her food. In addition, her energy continued to lag below optimal levels and we discovered that her pituitary gland was not producing enough TSH.

Because of Dr. Kharrazian’s functional neurology training, it occurred to me that an underperforming brain tie together all of her symptoms. Reduced parasympathetic output could be the cause of Barbara’s low pancreatic enzyme, HCL, and bile output as well as worsen her SIBO. Low dopamine and/or serotonin levels in the brain could reduce the hypothalamic stimulus of the pituitary, resulting in low TSH and hypothyroidism. Finally, she had demonstrated poor balance as part of her physical exam and reported life-long deficits in musculoskeletal coordination and balance (i.e., she was “klutzy.”)

Two weeks of serotonin and dopamine support, as well as nutritional support that specifically targeted her pituitary gland, resulted in the kind of energy that Barbara hadn’t felt in 4-5 years. She also noticed that her brain felt “sharper.” A month later, she began to notice that her digestion was improved, even though she had started to slack off on some of her supplements. It was when she was working in her yard alongside her son that how different she felt really sunk in. “Mom, remember when we used to work together in the yard? It’s nice to do that again,” he said.

My patient Derek, age seven, was suffering tremendously from mental, emotional, and dermatological symptoms. He could not bend certain joints because the eczema was so bad it caused loss of elasticity in his skin. He itched terribly and scratched so much he pulled pieces of flesh off. He also had terrible issues with stealing food. He snuck out of the house to steal food out of the trash and behaved in ways that were viewed as psychotic. Nobody understood his behavior. He had been on multiple antipsychotic medications typically prescribed for schizophrenia.

I ran some labs on Derek, and found he was profoundly reacting to multiple foods and various components of certain foods. He had profound gluteomorphin reactions that caused intense cravings and compelled him to steal foods. He had reactions to all transglutaminases—TG2, TG3, and TG6—which explained the extreme neurological symptoms and terrible skin reactions.

After eliminating all dairy and gluten from his diet, Derek was able to get off the medications. His skin is now healthy and normal, and he no longer steals food or behaves erratically. Just simple food elimination and a gut repair program changed this kid’s life forever.

Why Isn’t My Brain Working? 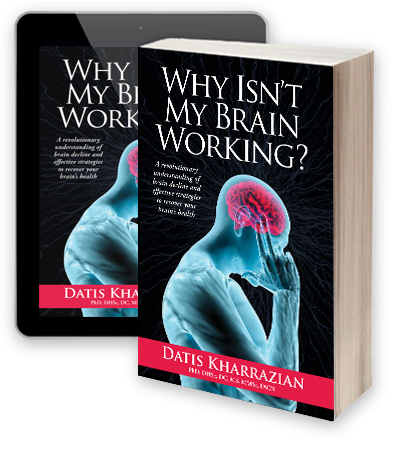 Why Do I Still Have Thyroid Symptoms?