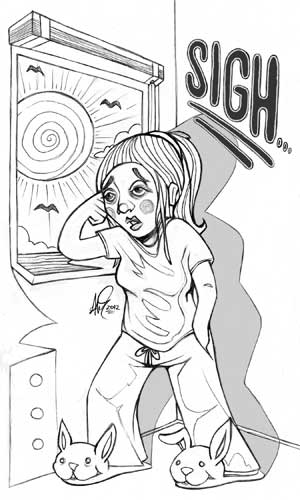 Lucy, 44, suffered from poor memory, poor mental endurance, and episodes of vertigo. She could no longer remember basic phone numbers and was having difficulty remembering people’s names. She began changing her daily routine to compensate for her lack of brain function and carried a notepad every place she went so she could write down the things she could no longer remember. She also had episodes of vertigo that would last several minutes and made it feel like the world was twirling around her. She saw many different physicians and was prescribed seasickness medication for her vertigo and told her memory loss was due to getting older.

Lucy was 45 minutes late for her first visit with me because she had trouble following the directions we gave her. She also brought in a tape recorder so she would not forget anything we discussed. It was obvious before I even did a history and exam that Lucy’s brain was not healthy. During the exam she couldn’t recall numbers I had given her to remember and she was unable to count backwards from 100. She had significant balance problems and she had difficulty perceiving vibration with a tuning fork and temperature in both of her feet. Although she did not have any signs of peripheral nerve disease, her brain clearly was not functioning well. I ordered an MRI, and it showed small blood vessel disease throughout her brain. In other words, her brain was degenerating because her blood vessels were unhealthy and could not carry blood to the brain efficiently. These findings were worrisome for a woman only 44 years old.

So what happened to Lucy? Lucy had been a strict and poorly practicing vegan since her late 20s. She had stopped menstruating in her 30s, and she was not even sure if she had menopause at this point. Lucy’s cholesterol was also 98 (normal total cholesterol is around 200). This was important because cholesterol is necessary to make all the major steroid hormones crucial for brain health. Her brain had literally been void of hormones for almost two decades. Her hormone lab results showed very low levels of reproductive hormones and high FSH levels. This meant she was postmenopausal at this point and did not even know it. Her chronic hormone deficiency was probably a key factor of her accelerated brain aging.

Lucy’s management plan included a drastic change in her diet, bioidentical hormone replacement, and various supplements to help support her brain health. I also gave her brain and balance exercises to activate her brain pathways.

Unfortunately for Lucy, some of her loss of brain function is permanent. The brain needs hormones to function and when deprived of them it ages quickly. The changes we made for Lucy helped improved her brain function and potentially slowed degeneration. If you have hormone symptoms and your brain is not working well, understanding the impact hormones have on brain health is very important.