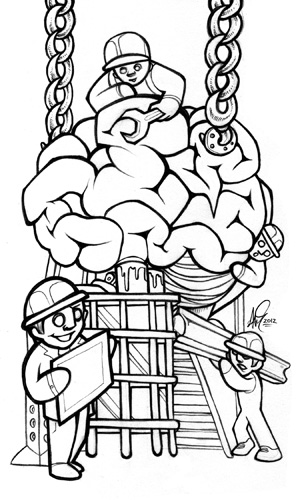 Ryan was a passenger in an Isuzu Rodeo on the way to a high school formal dance when the driver lost control of the vehicle and it rolled over three times. Three passengers were ejected from the car and two died. Ryan was wearing a seat belt that restrained him; however, the roof of the car came down on his head very violently and he suffered a severe head injury. At the hospital, he was intubated and kept on the respirator until he could breathe on his own, which happened two and a half days later. He has no memory of the accident. His last memory was about 15 minutes before the accident.

After one week he went home from the hospital with a neck brace and was given a cane for balance. He suffered chronic pain from ongoing muscle spasms. Three years after the accident, Ryan was sitting on the couch at his aunt and uncle’s house when he had a severe seizure. He remembers feeling a tug on his right foot and then his entire right side lifted and he dropped a drinking glass he was holding. He made a noise and, according to the family, his face turned gray and he went unconscious.

Paramedics were called and he was taken to the hospital. He was released the following evening with a prescription for seizure medication. Once out of the hospital, Ryan noticed intermittent tingling and loss of feeling in his arms, legs, hands, and feet—sensations that had never occurred before. It was more prominent in his right foot and leg, happened at different times, and was unprovoked. Ryan suffered from several other seizures and was given various anti-seizure medications with varying results. His last two seizures occurred during rehabilitation treatments.

Ryan came into my office with his parents three and a half years after the accident suffering from continued progression of his initial head trauma. He was no longer able to drive and needed to be watched at all times in case he had another seizure. He was also suffering from numbness and tingling sensations in his extremities and severe muscle tightness and spasm in his shoulders.

When I examined him I found his left frontal and parietal lobe were significantly damaged. He had difficulty sensing a metal pinwheel rolled across his skin or vibration on the right side of his body. He also suffered from spasticity in his right lower leg. He had abnormal pupil responses to light, and light made his entire brain fatigue.

What was most concerning about Ryan was that too much stimulation just from the examination would cause muscle spasms in his right lower leg, one of the earliest signs of an impending seizure. I had to be very careful examining him as I did not want to induce a seizure. I placed him on a heart rate monitor and constantly watched his right leg muscle tone to make sure he was not going to go into a seizure.

During the examination I found that having him perform eye movements called “optikinetics” in a specific direction stimulated the injured areas of his brain to relax his muscle tightness and regain his ability to better perceive sensation on the right side of his body. However, if I continued the therapy for too many repetitions he would get worse, which was a sign his brain chemistry was not ready to handle aggressive brain therapy. I needed to use brain rehabilitation therapy to rebuild, or develop positive plasticity, in the injured areas of his brain. But the brain inflammation from his trauma was so severe it was compromising the ability of his neurons to respond.

What was most concerning about Ryan’s case is that he had become worse since his injury three years earlier. Typically after a severe head injury, there is swelling in the brain and as the swelling goes down many functions return. However, the consequences of a head injury for many people do not appear until years after the trauma. This is because a brain injury activates the brain’s microglia cells, which create inflammation. This inflammation can persist long after the injury. This continued microglia inflammatory cascade leads to ongoing neuron loss and the possible progression of neuron death.

My first and immediate goal with Ryan was to dampen his microglia brain inflammation. I placed him on him on a protocol of high-dose flavonoids that have been shown in peer-reviewed studies to dampen microglia brain inflammation. I also placed him on several natural compounds to improve blood flow to his brain. These strategies will be discussed in the next few chapters. I taught him how to stabilize his blood sugar levels to keep energy levels in his brain consistent while we taught him how to rehabilitate his brain.

Within a couple of months, Ryan’s leg spasm and tingling sensations were completely resolved and his ability to function in daily life began to return quickly. Within a short period of time he was able to attend college and get involved with theater productions. After a couple of years of being seizure-free, he was able to travel to Europe on his own. It has been more than three years now that he has been seizure-free and he is attending college full time.

You may not have a brain injury but perhaps you have some level of brain degeneration or impaired brain function. Despite the level of brain impairment there is always great potential and hope to improve the function of your brain, and hence the quality of your life. The brain is considered plastic, meaning it is has the capacity to be remolded. Just as plastic can be melted and changed, so can your brain.