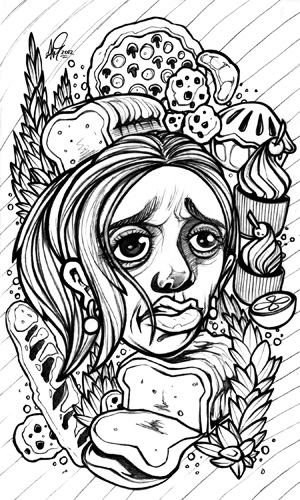 Peggy, 12, suffered from chronic migraines, episodes of vomiting, gastric ulcers, joint pain, and bowel irregularities. It’s not surprising that she also did poorly in school. Her mother told me that she had struggled with some type of health condition her entire life. She was colicky baby, had chronic ear infections, developed asthma, and went through a period of having seizures that she outgrew. She has seen more doctors by the age of 12 than most adults have seen in their entire life, enduring countless blood tests, imaging studies, and medical evaluations by a multitude of specialists. She has also taken various medications over the years for her symptoms.

Peggy’s mother read my thyroid book and incorporated some of the recommendations, which helped Peggy feel much better. This convinced Peggy’s mother I was the only health care practitioner who could help her daughter, and they flew across the country for a consultation.

When I first saw Peggy it was obvious she was not growing appropriately. Although she was 12 she looked years younger. Peggy was sweet and behaved as if being in a doctor’s office was normal. It’s always sad to see a young child display so much experience visiting a doctor’s office.

Peggy’s mother had been diagnosed with hypothyroidism more than 20 years ago, but after she read my book she asked her doctor to test her for autoimmune Hashimoto’s hypothyroidism. The test came back positive and she followed the many strategies in the thyroid book, including adopting a gluten-free diet. For the first time in years she felt energetic and was able to lose weight. Naturally, she was concerned her daughter might also have Hashimoto’s or some other autoimmune disorder, and she asked me to look at Peggy’s medical file.

Peggy’s medical file was four inches thick and included numerous labs and medical tests. My initial concern was Peggy may have a gluten sensitivity or celiac disease. Her lab work showed she had been screened for celiac disease (an extreme form of dietary gluten sensitivity), and the results were negative. Peggy’s mother put her daughter on a gluten-free diet for two weeks anyway, but it did not make a difference in her symptoms.

When I examined Peggy I found she had hyperreflexia, or overactive reflexes, in all of her limbs. When I tapped her knee, instead of her leg responding with a small kick her entire body jumped aggressively. She also had severe systemic hyperalgesia, or increased sensitivity to pain. When I stroked her skin anywhere on her body with a pinwheel she felt severe pain and withdrew. She also had severe sensitivity to high-pitched sound and to light. When I tested her eye reflexes with a pen light and her hearing with a tuning fork, she developed immediate head pain and nausea. These findings were not associated with a brain lesion or disease of the nervous system but rather with a metabolic or chemical imbalance that was impacting her brain and nervous system.

I ran a series of tests to evaluate her case, including a more comprehensive gluten sensitivity test, since many children of a parent with Hashimoto’s are gluten intolerant. Gluten sensitivity is known to not only trigger autoimmunity, but also directly damage the nervous system. The tests her doctors had done were for classic celiac disease and were not thorough enough to rule out immune reactions to gluten. Additionally, going off gluten for two weeks is not enough for most people to see changes or improvements, especially if they have intestinal permeability or are still eating foods that cross react with gluten.

She also had reactions to milk and sesame, which are similar enough in their structure to gluten to create an immune response. Lastly, her labs also indicated intestinal permeability.

Based on her test results we started Peggy on a gluten-free, dairy-free, and sesame-free diet and a nutritional and lifestyle plan to address the intestinal permeability. Her response to the plan was completely life changing. She began to grow. The stomach aches, migraines, and joint pain disappeared. She began excelling in school for the first time.

When I talked to her mother during a follow-up consultation, she was crying and asked me why someone didn’t diagnose her daughter properly years ago. I told her at least Peggy was properly diagnosed at age 12 and did not have to wait 30 years like her mother.

I share Peggy’s story because she is one of many individuals with a gluten sensitivity who are overlooked by the health care system. Unfortunately, many doctors today are not trained to identify gluten sensitivity and are still stuck on outdated and limited models of celiac disease diagnosis. These models have been thoroughly debated in the scientific literature today and recent research has made it very clear the criteria for diagnosing celiac disease are very limited.

If your brain is not working or if you have a neurological disease you must be properly tested for the entire spectrum of gluten sensitivity and not just for the limited markers for celiac disease. In this chapter I will teach you all of the key concepts.