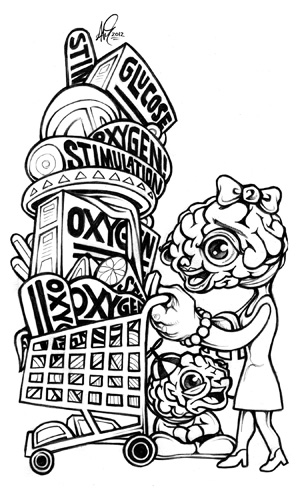 Kevin was a 12-year old boy who had been having difficulty in school for most of his young life. He was also very uncoordinated and not good at sports and spent most of his time playing video games. His father privately told me Kevin could not kick a soccer ball if his life depended on it and he was always fidgeting and making snorting noises. He also suffered from chronic allergies, asthma, and bouts of depression and had been prescribed an asthma inhaler and antihistamines by his doctor. Kevin’s father was worried his son would no do well in academically or socially in high school. Although he didn’t say it, I detected that despite loving his son very much, Kevin’s father was also embarrassed by him.

The first time I saw Kevin in my office it was clear his brain was not healthy. Kevin had a brain disorder. He walked in with a stooped posture and his arms swinging all over the place. These are signs of poor muscle tone, or “hypotonia.” He also could not keep still and needed to move all of the time while sitting in the chair. This is called akathisia and is associated with dysfunction in a part of the brain called the basal ganglia. The snorting noises and head jerks are categorized as simple motor and vocal tics, which also occur from a basal ganglia dysfunction. Unfortunately, such established signs of brain impairment go overlooked in the health care system as most physicians today are unfamiliar with brain function and neurology.

An examination revealed Kevin had abnormal deep tendon reflexes and muscle tone. He also failed most of his balance and coordination neurological tests. However, most striking was that when I measured his oxygen saturation levels with a pulse oximeter his levels were below normal by 10 percent, meaning his brain and other tissues were not getting sufficient oxygen. We could also see this by his white fingernails from lack of oxygen and blood reaching his fingertips. Using a stethoscope I could hear severe wheezing from his asthma, which explained why his brain was not getting enough oxygen.

In these situations it is important to oxygenate the brain, which meant we needed to address his asthma and poor breathing. I put him on an anti-inflammatory diet, boasted his lung antioxidant levels, and supported his adrenal and blood glucose levels. I also had him perform breathing exercises with a heavy book on his abdomen to strengthen his diaphragm. Within the first few weeks he had cut down use of his asthma inhaler by 50 percent and by the end of two months he rarely needed it.

Over time we did many more things to help improve Kevin’s brain, such as giving him many coordination and balance exercises to improve his brain integration. But it would have been very difficult without boosting oxygen delivery to his brain first. As we stabilized his blood sugar levels he was also able to loosen his dietary restrictions.

I share Kevin’s story with you because there is no magic supplement or treatment for the brain, but the brain needs three essential things to function at its best: oxygen, glucose, and stimulation.