Brain autoimmunity can be devastating but is often manageable 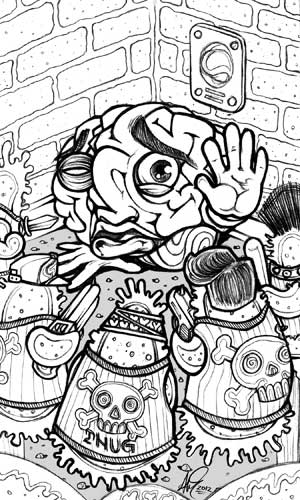 Kate, 62, began having almost weekly six-hour episodes of dizziness and uncontrollable vomiting when she was 50 years old. She went to various doctors and nobody knew what was causing the episodes. Out of desperation her physicians put her on steroids and antibiotics, but they did not help. She stopped going out or driving for fear of the episodes, becoming a prisoner in her own home. Her entire life and future changed.

After four years of suffering, Kate was finally diagnosed with a condition called Meniere’s disease. It is a deteriorating disease of the inner ear that leads to hearing loss, dizziness, and ringing in the ear. She was forced to take an anti-anxiety medication daily to calm the dizziness.

Kate’s condition continued to progress and eventually performed surgery, cutting her left inner ear nerve and inserting a shunt. It resulted in permanent deafness in her left ear but relieved some of her dizziness. Her doctor suggested future surgery in her right ear, but Kate was still struggling every day with vertigo, nausea, fear, digestive symptoms, emotional outbursts, significant fatigue, and a broken spirit.

Kate sat next to my wife on long airplane trip. They talked and Kate told my wife her story. My wife put her hand on Kate’s shoulder and told her, “My husband can help you; he sees complex cases such as yours all the time. He will know what to do. Please call his office when you land.”

My wife told me about Kate when she got home and made me promise to take her as a patient. Kate called and I was able to see her after several weeks. When she came into my office I could tell she was scared and really worried about how much worse her condition might become.

An examination made it clear Meniere’s disease was impacting both inner ears and that her overall brain function was quite compromised. Just simple visual eye movements gave her vertigo and nausea, and her inner ear system was inappropriately stimulating her limbic system, which led to uncontrollable emotional responses. She could barely function during the day and had zero capacity to deal with any stress. Her hearing was continuously declining. She also had a few episodes of “drop attacks,” in which the nerve in her inner ear spontaneously fired and pushed her straight to the ground, as if someone was pushing her forcefully.

I was worried about Kate because I could see how rapidly she had been declining. She had Meniere’s disease but she also had a brain with very little endurance, which was why her brain had so little ability to compensate for her inner ear nerve disorder. I organized inner ear and brain exercises for her condition based on functional neurology rehabilitation, but her brain had no capacity to perform them without immediate fatigue. Her brain chemistry was severely challenged.

Kate’s laboratory tests showed she had neurological autoimmunity to nerve proteins and to the protective sheath surrounding her nerves. She was also having severe episodes of hypoglycemia (low blood sugar), had no ability to digest food, and had developed significant intestinal and blood-brain barrier permeability as evidenced by high levels of occludin and zonulin antibodies. We also found Kate had laboratory markers for celiac disease.

Basically, her immune system was attacking her nervous system (brain autoimmunity). Her neurons were not able to function because of the significant inflammation affecting her brain and nervous system. Her brain was deficient in fuel and she had a disrupted gut-brain axis. Anti-anxiety medication and surgery on her other inner ear nerve were not going to make these mechanisms go away.

We followed clinical strategies to modulate her autoimmunity with diet, lifestyle, and nutritional interventions. She followed a diet to stabilize her blood glucose levels, and we started correcting her gut-brain axis imbalances. Kate responded very quickly to her treatment plan;, soon she no longer had any drop attacks or emotional swings. Her mood, energy, and balance all improved significantly.

I spoke with Kate on the phone a few weeks after we started treatment. I immediately noticed the strength in her voice and the sense of empowerment in her personality—she had transformed into a completely different person. Although her autoimmune condition is incurable, Kate is doing much better today. She is functioning at a very high level and has the ability to enjoy her life once again.

We figured out strategies to improve her brain function and to dampen the mechanisms that were destroying it. These strategies are not part of the standard health care model for patients with her condition. The only strategy the world’s leading Meniere’s clinic could give her was to surgically remove her inner ear nerves followed by lifelong therapy with anti-anxiety and anti-nausea medications.

Fortunately, we were able to dig a little deeper and look at her overall brain health with the goal of improving its function and health instead of just suppressing her symptoms or cutting out areas of dysfunction. Kate has something in common with most people with autoimmune neurological disorders—they are never given any strategies to manage the autoimmunity.