The over anxious brain 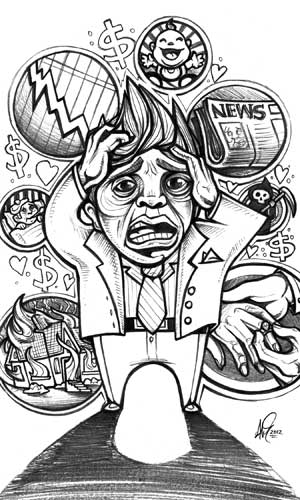 Carol was diagnosed with a rare condition called burning mouth syndrome. She experienced a continuous burning pain on the tip of her tongue and the roof of her mouth. She had seen various specialists but they always concluded her symptoms were a mystery. In addition to the constant burning, Carol suffered from constant nervousness and episodes of anxiety. Over the years she coped with her symptoms by consuming alcohol beginning each afternoon. Carol was suffering greatly, and alcohol was the only thing that helped. Although many people mistook her for an alcoholic I knew she wasn’t. It was very clear Carol was simply doing whatever it took to alleviate the daily suffering.

When I evaluated Carol I saw that the tip of her tongue and the roof of her mouth were scraped away. An examination made it clear Carol’s burning mouth syndrome was secondary to a movement disorder called motor tics. Tics are a neurological disease in which a person has a buildup sensation to perform a certain movement, which brings relief. With a tic this happens over and over again. It is caused by disease in part of the brain called the basal ganglia. Carol could not stop the urge to scrape the roof of her mouth with her tongue all day. She would try to stop, but then the urge to do it would build up so much the tic became worse.

Carol’s examination findings indicated she had loss of function of her basal ganglia and cerebellum. These are areas of the brain with very powerful GABA activity. GABA is an inhibitory neurotransmitter that calms neurological pathways. I then tested Carol for gluten sensitivity and neurological autoimmunity. The results showed very high antibodies to gluten and to GAD, an enzyme in the brain that makes GABA. In other words, her inability to suppress the scraping of the roof of her mouth were related to an autoimmune condition that prevented the production of GABA and a gluten intolerance.

I put Carol on an autoimmune diet and gut-repair program, gave her exercises to rehabilitate her basal ganglia, and gave her natural compounds to support GABA pathways. Everything seemed to help her overall brain function, anxiety, and nervousness, but it only reduced her tic disorder somewhat. Her suffering was so significant she could not stop her alcohol abuse. Alcohol suppressed her brain, calmed her symptoms, and alleviated the pain. I had a long discussion with Carol and her husband about seeking a neurologist specializing in movement disorders to try various medications to either support GABA activity or suppress dopamine activity, but she decided to stay with her current regimen, which unfortunately included excessive alcohol abuse.

I share Carol’s case with you because it is an extreme case of GABA pathway dysfunction. When neurological pathways fail it can cause various expressions of the dysfunction that are not a part of the standard diagnosis list. As a clinician I wished I could have seen her 10 years earlier, before she progressed to where she is now.

Not all people with GABA dysfunction develop the degree of suffering Carol had. The most common GABA issues are anxiety, nervousness, and insomnia. Uncontrollable movement disorders, such as restless leg syndrome, tics, sound sensitivity, light sensitivity, constant worry, and emotional attacks for no apparent reason are common with GABA impairments. If your brain is not working and you feel you cannot calm down or shut down your brain, this chapter is very important for you.